To Catch a Tiger Release Day!

It's finally here! TO CATCH A TIGER (Tiger Shifters 7) is now available. And for a limited time, it's only $0.99. Catch it (har har har--sorry, I couldn't help myself) while you can at this special release price.

I'd also like to give a Thank You shout out to all the wonderful people at my Facebook Page who helped me pick this title. Thanks, everyone! 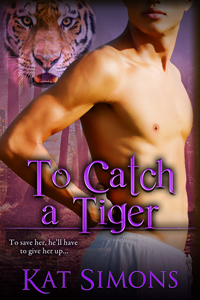 
To save her, he’ll have to give her up…and she won’t let him go.

Dr. Ryan Yin hates his people’s mating laws, and he’s not the only tiger shifter male who feels that way. But the grumblings of some young males, led by an enigmatic and dangerous leader, threaten his people’s survival. Ryan’s very real disgust with the Mate Run allows him to infiltrate the group, where he hopes the information he finds can stave off a civil war. He never guesses the young males will go so far as to kidnap tigresses. Now Ryan has to find a way to keep the women alive and get them to safety before anyone else dies. He never expects that among the captives he’ll find his mate. Lakshmi is strong, fierce, and beautiful…and completely beyond his reach.

As a rare female tiger shifter, Lakshmi Das was promised by her people that in exchange for taking part in the Mate Run, she and the other tigresses would be safe from the violence and bloodshed of centuries past. Her people failed in that promise. Now Lakshmi is at the mercy of a crazy tiger and his followers who are intent on turning her into a slave mate. Her only hope of escape is the group’s sexy, delicious-smelling doctor, a tiger she can’t let herself trust but who draws her like no other man she’s ever met.

Escape will come at a price neither of them expects. They’ll have to defy their people’s laws if they have any hope of being together…but only if they can survive the vengeance of an insane shifter determined to start a rebellion.