Standalone Releases and a Surprise for July

News and Updates this month include the release of two stories that were originally published in the Haunts and Howls and Guardian Spells contemporary fantasy collection. And information about my "now for something a little different" coming out next month!

The two releases this month are standalone eBooks for The Unshattered Sword (out June 7th) and Destiny Through the Cats Eyes (out June 28th).

The Unshattered Sword turned out to be a sort of ancient history prequel to the Cary Redmond series--a hint as to where the Protectors started. I hadn't intended that when I started writing, but that's what happened.

In the land of the Fae, when clans go to war, destruction spreads throughout the realm. To prevent disaster, the clans fight ritual battles through single combatants. One warrior, standing between her people and utter devastation.

Lilia knows that losing the coming fight will mean the end of her people. Everything rests on her shoulders, and her sword. Her ability to stand against the powerful magic of their greatest enemy.

Because if her strength falters…

Her people will die.

Destiny Through the Cats Eyes is a novella that I found so much fun to write, I may have to write more in this series. I'm really interested in seeing what happens between Erica and the cats. *grin*

Her future holds more danger, magic, and…cats than she anticipated.

When Erica Randal learns her beloved aunt has disappeared, she rushes home, desperate to find her. But when she arrives, everything in her aunt’s house appears normal. Except for the missing cats.

Instead of the simple explanation Erica hopes for, she discovers her aunt is not who she thought. Magic is real. Deadly enemies gather to overwhelm her world. And a powerful destiny awaits her.

If she’s brave enough to embrace it.

And now for the big July news!

I'm branching out into a (slightly) different genre. Contemporary Romance! It's not the first time I've written romance set in contemporary times, but even my hockey romances as Isabo Kelly have had some level of "woo woo," as a former editor used to call it. Some level of the paranormal or fantasy. My July release is just a straight up, low angst, trope-tastic contemporary romance with an adorkable couple in a slipstream non-Covid reality that I just had to write.

DESIGNED FOR YOU is available for preorder now, and releases on July 12th! I wrote this book while I was "going through some things" and needed something easy and light and fun to write. This is what came out. I love these two together. 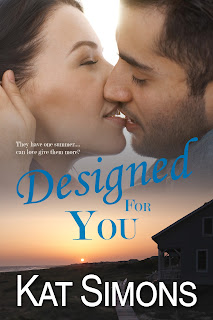 If you like Grumpy/Sunshine, Friends-to-Lovers, Boy/Girl Next Door, and Fake Dating, I think you'll enjoy this one. I couldn't squeeze in Only-One-Bed, but I'll try for that next time. *grin*

Because this won't be my only contemporary romance. I have a novella coming out in December, and a third story I'm about a third of the way through writing now. Plus, I think the heroine's best friend in DESIGNED FOR YOU deserves a story, too.

For those worried, NO I'm not moving away from Paranormal Romance or Urban Fantasy. In fact, the next Demon Witch book is going into edits as we speak for a September release. And the next Haunts and Howls contemporary fantasy collection is coming together for October. I also have a new paranormal romance series I want to launch in early 2023.

So I will not be moving away from my favorite genres! I'm just branching out a little. This branching out will also include some mysteries as well, so look out for more on that in future posts! I'm a genre writing madwoman at the moment, and I'm very excited to bring so many different stories to readers.

Until next month, Happy Reading!