I have a new series COMING SOON! I'm very excited about this series and I hope readers will enjoy it too. It's an urban fantasy series with a strong romantic element, featuring one of my favorite heroines to date: Cary Redmond.

Cary is, in her own words, a walking, talking Kevlar vest. Officially, her job description is Protector. She gets between good guys and bad guys and ensures the good guys don't get killed. But boy, does Cary encounter a lot of Trouble!

This particular series had been bouncing around in my head for many years now, so I'm delighted to finally bring it to readers. There will be a seven novel arc with a whole bunch of short stories scattered through out. The short stories are mostly just fun stuff I felt like writing--origin stories of how Cary met the people (and pets!) in her life, some of her other adventures both before and after the series starts, just fun stuff. The shorts won't be necessary for reading and understanding what's happening in the novels, but if you like Cary and her adventures, I think you'll enjoy the short stories as well.

As a little warning, for those long time Urban Fantasy readers: I don't write this series in first person, I write in third, so this will be a little different to the typical books. That may or may not appeal to you, so I wanted to be sure readers were clear on that upfront.

To celebrate the upcoming release of book number 1 later this year (end of August/beginning of September so long as the copyedits and formatting go well!), here's a sneak peak at the cover! 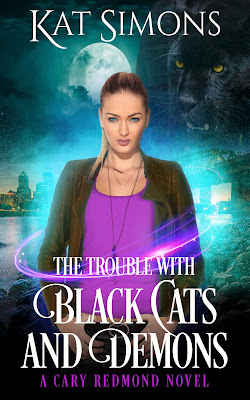 Cary Redmond sure does. This time with a particularly sexy leopard shifter who seems to think she’s his mate, a faery mentor who’s suddenly made himself scarce, and an ancient demon searching for a mysterious, mystical source of power in the forest outside of town. Throw in a vulnerable kid for her to keep safe and it’s just another day in the life of Portland’s resident Protector—save the innocent, manage her private life, keep all hell from breaking loose, and try not to die.

Check back for more as the release date nears! And if that cover sparks you're curiosity, keep reading for a short excerpt from the book. Happy Reading!!


THE TROUBLE WITH BLACK CATS AND DEMONS
(c) Kat Simons


“Not again.” Cary Redmond ducked as another fireball clipped over her head. “You don’t think fireballs are a bit over the top,” she shouted up at the ceiling then had to duck again as a dagger whispered past her ear.

She needed to find the damned cat and get out of here. She scanned the apartment from her dubious cover behind a table piled high with unopened mail. Fireballs, daggers, gusts of preternatural wind, freezing hail, and the occasional lightning bolt dropped around her, roaring through the living room in a bright cacophony of magical mayhem.

The lightning bolts flashing in the small confines were pretty spectacular. If they hadn’t been trying to fry her, she might have enjoyed the show.

“Jaxer, I’m going to kill you for this.”

Normally, this kind of thing was just a part of her job. She was a Protector and literally got paid to run around keeping people safe, mostly from magical bad guys. Not that she’d asked for the job, but that was another story. It was her job, so she faced off against dangerous stuff because the Nags—her bosses—told her to.

Tonight, however, was not an official assignment. Tonight, she was just doing a favor for her demented faery mentor. The bastard knew exactly how to get to her. All he had to do was mention a defenseless little black kitty cat and she was done for. How could she refuse to help a kitty? People did rotten things to black cats on Halloween.

Except Jaxer had forgotten to warn her about the fireballs.

She screeched through her teeth and dove behind the couch as one of the aforementioned fireballs barreled toward her. She cursed Jaxer as she took a quick look under the couch for the cat. Where the hell was it?

She’d called out to it when she’d first entered the apartment but hadn’t gotten any irate kitty responses. After her lurching hunt of the living room and kitchen, the only place left was the bedroom.

She pulled in a deep breath as she contemplated the long space of unprotected ground between her hiding spot behind the couch and the bedroom door. Once she found the cat, this would be easier. When she was actively protecting something, very little of the magical dangers could get to her, and nothing deadly would touch her. She just had to find the cat first. And quickly. They had to be out of this cursed apartment before midnight. Before the wizard got home and all hell broke loose.

She ducked flying objects and ran to the bedroom, squealing when a lightning bolt hit the ground right behind her. Crossing her fingers that there were no nasty spells waiting for her, she lunged through the half-open door and cringed in anticipation of magical repercussions as she fell onto a red-carpeted floor. She held perfectly still, waiting. Nothing. She let out a breath and pushed herself up onto her hands and knees, shaking her head. All this for a cat. That bastard Jaxer had a lot to answer for.

She rose to a crouch, trying to calm her racing pulse, and froze.

In front of her sat a huge bed, which she barely noticed because the naked man lying in the middle of the enormous mattress stopped her heart.


THE TROUBLE WITH BLACK CATS AND DEMONS (The Cary Redmond series, Book 1) Coming Soon in 2019!!