Well, okay, it's only hot on this side of the world. For those of you in the southern hemisphere, I hope the winter is treating you well!

This month, I have a new release that starts a new series! This series goes back in time to the mysterious past of witch Angela "Angie" Jordan, one of Cary Redmond's best friends. There are demons in Angie history, things she never talks about. Well, now you can see what she's been keeping so close to her chest.

MOONLIT STRANGE is the short story that launches the series and is essentially a prequel to the first book in the series. That book, BONE LANTERN WITCH, will be out in September 2021. 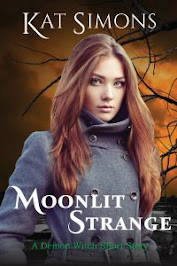 She’s a witch in a demon hunter’s world…

Angela Jordan is a witch with a very particular set of skills. One of those skills has her embroiled in the demon hunter world. Not her calling. But the hunt still lures her in. Confronting the kinds of nightmares most humans never have to face, Angie accepts the work though she wouldn’t go so far as to say she enjoys it. Still, demon hunting keeps her close to the man she loves. And saving innocent lives is worth the danger.

But ensuring demons aren’t loosed on the human realm comes at a cost. One that might be too high for Angie to pay.

For fans of the Cary Redmond series, don't worry, there's more Cary to come, including a Christmas short story and a novella that leads into Book 6 in the series. Book 6 will be out in January 2022. Check back for more details on that release and the other Cary stories.

In the meantime, I hope everyone is doing well and staying safe, that health and good reading are filling your days.