But just to start the year off right, a new novel! Book 5 in the Cary Redmond series, The Trouble with Magic and Faery Curses, is out now. This one was super fun to write. And I made myself cry at the end while editing. Which is usually a good sign. (Either that or 2020 had really gotten to me at that point, and I just needed to cry.) I hope readers of this series will enjoy this one as much as I enjoyed writing it! 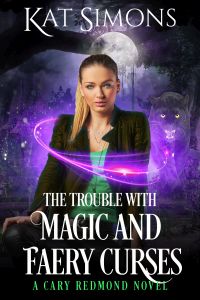 Trouble’s in the Curses…

Halfway through her test year as a magical Protector, Cary Redmond is starting to think she just might survive. With her leopard shifter mate at her side, she’s even managed to enjoy parts of the journey.

Then her latest job reveals trouble brewing in Faery. Trouble that could affect all the realms and seriously complicate her test year. The path of danger points to the English Faery court—and her former mentor, Jaxer. She wants to help her friend, even though their current relationship can best be described as complicated. But stepping into a realm made entirely of magic, when she’s just discovered she can absorb magic, seems like a bad idea. Especially since she hasn’t learned how to release that magic yet.

With a world-ending threat looming, even Cary’s bosses want her to go. And she won’t be going alone. Both her mate and her mentor will be at her back. But to save the world this time, Cary has to confront her greatest fears. And the knowledge that if she fails…

Her own realm will fall.

Look out for more Cary Redmond adventures over the next months.

And coming in May 2021, a new Paranormal Romance! This is a cross-over story between the Tiger Shifters World and Cary Redmond's world. The hero is Dylan Jones (Deacon's youngest brother from the Cary Redmond series) and the heroine is Cat Donovan, whose older sister Amy Donovan was the heroine in Taming Her Tiger (Tiger Shifters 9).

Stay tuned for more on this new Paranormal Romance!

Until next month, I hope everyone is continuing to stay safe and healthy. 2020 was a tough year, and we're not through the hard stuff yet. But there's hope and light on the horizon. Stay safe everyone! Here's to better days ahead.

And until then, Happy Reading!