For a paranormal fantasy fiction lover and all around Halloween fan, this is my favorite time of year! I can't help it. The weather (cooling down here), the fall leaves, the food, the spookiness. All of it.
So I supposed it's pretty cool I have two releases to add for this month. October deserves two releases.
The first I mentioned last month, and it technically released September 28, but why nitpick. Close enough to October to count. Haunts and Howls and Guardian Spells is a short story collection of contemporary fantasy stories, all on the them with a theme of protectors and guardians. Which means that of course there's a new Cary Redmond short story in the anthology--one not published anywhere else!--because she's my most on-the-nose Protector characters. Haunts and Howls and Guardian Spells is out in eBook, Trade paperback, and Large Print editions! 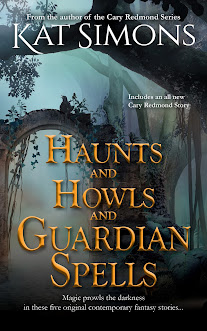 HAUNTS AND HOWLS AND GUARDIAN SPELLS
A Contemporary Fantasy Short Story Collection
EBook
Trade Print: Amazon | B&N | Book Depository | Indie Bound
Large Print: Amazon | B&N | Book Depository | Indie Bound
Between haunts and howls…new guardians rise.
In mystical worlds of deadly magic and danger, the innocent need heroes, guardians, protectors to stand in the way of evil, to keep the world safe and balanced—even if the imperiled never realize trouble looms just out of sight.
Reluctant heroes strive to do whatever they must in these five short stories of contemporary fantasy, where nothing is as it seems. Where wizards and faeries lurk, and shapeshifters prowl. Where magic swells to both hurt and heal. And where destiny calls those fated to save the world.
For readers who love dark tales of mystery and magic, with heroes fated to keep innocent people safe, don’t miss this exciting collection from bestselling author Kat Simons. Including a brand new story in the action-packed urban fantasy Cary Redmond series.

I enjoyed writing and putting this collection together so much I think I'll make it an annual thing. I even have a few themes for future collections in mind already--demons anyone? So look out for another Haunts and Howls collections next year right around this time!
~~~
My other release this month is another Joan of Kerry short story! (Yes, I'm all about the short stories this month apparently. Quick reads so there's lots of time for other spooky things like...pumpkin spiced everything *grin*) Joan and the Leprechaun is out now! 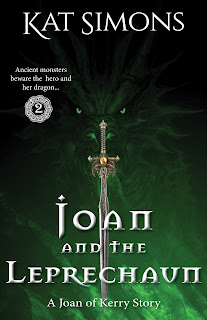 For Joan, having a dragon best friend and heroing buddy means dealing with sneaky leprechauns. All the time. Because her dragon’s scales are made of gold. And nothing calls to a leprechaun like gold.

So when one of cunning devils steals off with some of those golden scales, Joan rushes in to retrieve the valuable prize. Only to discover a predicament more complicated and deadly than she expects. A situation that requires a hero.

Joan takes up her sword, once again answering the call to protect innocent lives.

Another quest for a hero and her dragon.

For the record, it took me ages to get the spelling of leprechaun right consistently. Something about that word makes my brain short circuit, and I kept wanting to add extra letters. LOL. I think I've got it now, though. My Irish husband would be proud.
Check back next month for a brand new Cary Redmond short story, this one a Christmas story! Because of course, Cary can't just have a normal, boring few days around Christmas, could she?

Until next month, I hope this finds you safe and healthy.