This month, I have a short novella out that was originally published last fall in the Haunts and Howls and Guardian Spells collection. Tombstone Wizard surprised me a little with the direction it ended up going while I was writing it. But I'm pretty pleased with the way it turned out. I really hope readers are too!

It's officially out now as a stand alone in eBook. 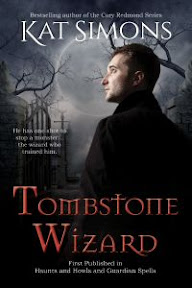 A cold, foggy night in a graveyard.

A mythical monster on the prowl. And only the magic he brought with him to help.

Charles never thought he’d have to challenge his mentor and teacher, a wizard whose powers far exceeded his own. But when his teacher turns to the unthinkable, and bodies start piling up, Charles knows his time has run out.

To end the violence, Charles must best his teacher in a battle of magic, trapped inside a mystical domain. The only way out… Victory.

Additionally, I have the first Box Set for the Cary Redmond series releasing at the end of the month, March 29th. If you haven't tried the series, now's the chance to get the first three books at a discounted price! And since book 7 in the series is out in May, it's a great way to catch up.
Next month check back for a novella collection from the Cary Redmond series as well as news on the upcoming release of THE TROUBLE WITH DEATH AND DEMON GODS, Cary Redmond Book 7.
Until then, happy reading!
~Kat
Posted by Kat Simons at 3:00 AM