Welcoming in 2023 with a New Paranormal Romance Series

Happy New Year! I hope the new year is bringing you good luck and good books and treating you kindly so far.
I'm starting off the new year with a brand new paranormal romance series that I've been so eager to write and have available for readers! It's been a series in my head for a long time, so it's a little hard to believe the release of the first book is finally here.
DARKNESS IN STONE is the first in the Seven Families series, starting with the Wolf Family. These paranormal romances are a little on the darker side and feature pretty spooky monsters, so enter this world with care. I hope those of you who enjoy spooky scary stuff will enjoy the series!
Available in eBook, Trade Paperback, and Large Print editions, you can also order it through your local library. For a limited time, the lower $1.99 preorder eBook price will remain available, but this will go up to the regular $4.99 price on February 6th, so if you're interested, now is the time to pick it up. 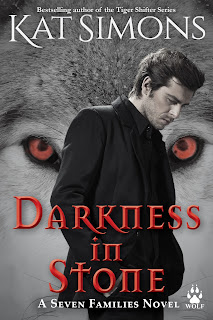 Eric Logan leads an ancient family of monster hunters, gifted by one god, cursed by another millennia ago. To break his curse, Eric must win the heart of his destined love. He knows Katie Donovan holds his future in her hands the instant they speak. But winning her body and soul proves complicated when monsters threaten his home. And if they learn her true identity, Katie will never be safe again.

Eager to get her journalistic career back on track, Katie bargains with her editor, offering an interview with the elusive billionaire and head of Logan International in exchange for the chance to write more hard-hitting stories. Thanks to her hateful psychic ability, Katie knows she can get the interview, even though the Logans never answer reporter’s questions. She doesn’t expect to have her world turned upside down by the gorgeously sexy Eric Logan, whose secrets draw Katie in even more than her Pulitzer dreams.

The chemistry between them burns hot and promising, a passion Katie finds impossible to resist. But Eric’s world holds terrifying horrors unlike anything she’s ever encounter. Nightmare monsters and danger at every turn. Even a Pulitzer might not be worth the risks. The more she learns about Eric, though, the harder leaving his world will be. And surviving long enough to find out if she can trust him might be the hardest part of all.

On top of the exciting news of a new paranormal romance series, I'm also starting the new year with a new store!
I'm pretty excited about this, though it's still a work in progress. But if you'd like to buy from me directly, you can visit Kat Simons Books and see the store. DARKNESS IN STONE is available there now, and as the year rolls along, we'll start releasing my books earlier to my store, before they go wide. I'll also have discounts available for newsletter subscribers, so if you'd like to keep up-to-date on all my releases, get free reads, and enjoy the occasional discount on books, please join!
Right now, I only have eBooks available, all of which are fulfilled by BookFunnel for ease of download and excellent customer support. In the next few months, I'll roll out print editions. And later in the year, I'm hoping to have digitally narrated audiobooks available. Eventually, I'm hoping to have voice actor narrated audiobook options available, too, but at the moment, that level of production is outside my operating costs. I really want to have all my books as accessible as possible, though, and the digitally narrated versions are within my current means, so we'll be working to make those available at least.
At any rate, there will be more to come with the store. In the meantime, you can poke around and see what's there. And let me know what you think and what you'd like to see made available. I'm hoping to make it a hub for all things Kat Simons, and soon, all things by my alt-ego Isabo Kelly too.
~~~

In February I have two new novellas releasing (busy month!)
The first is a new Joan of Kerry story JOAN AND THE KRAKEN, when Joan and her dragon companion Rory have to face, well, a kraken. That eBook releases on February 14th because apparently I'm not a stickler for releasing romances in February.

Check back next month for details on both releases and details about the second Seven Families book. And don't forget to check out Kat Simons Books  at https://tanddpublishingbookstore.com!
Until next month, I hope 2023 is treating you gently so far and you have plenty of good books to read.